Sunset over the pier in Yasawa-i-rara, Yasawa, Fiji

The majority of my cultural psychology research focuses on work with communities of Indigenous iTaukei Fijians living in rural areas on outlying islands of Fiji.

The iTaukei communities that I work with tend to rely upon traditional ways of being and doing. Kinship relations form the basis of their political hierarchy and organize the cooperative tasks that make long-term subsistence possible. iTaukei Fijians provide two particularly important perspectives for my research:

1) Social Cognition – they have a normative preference for citing observable actions, rather than inferred mental states, when discussing others’ behaviours.

2) Religious Belief & Cooperation – Many iTaukei Fijians report religious and supernatural beliefs that include traditional ancestor spirits that support local social networks and Christian beliefs that extend concern to distant others outside the village.

In the first branch of my research, I focus on how culture shapes mind. I find that iTaukei Fijian adults tend to think less about internal mental states (but not emotions or social situations) than non-Indigenous Fijians and North Americas. Yasawan adults similarly base moral judgments more on outcome than non-Indigenous Fijians and North Americans. However, when induced to think about thoughts, iTaukei Fijians shift to intent focus by placing more blame on failed attempts. I also find that iTaukei Fijian children focus on intent. This suggests intentionality reasoning develops early and is either suppressed or elaborated upon by cultural learning later in life.

In a second main branch of my research, I look at how beliefs about supernatural agents’ minds and uncertainty about resource availability influence decisions to cooperate. Many iTaukei Fijians hold concurrent belief in both the universalistic, powerful Christian God as well as more limited, locally-oriented deified ancestors and spirits (kalou-vu “root gods” and tevoro “devils”). This plurality of belief is particularly interesting for my research into the different contents of supernatural agent beliefs and how these beliefs might differentially inform social decisions.

iTaukei Fijians who believe that material resources are scarce and that supernatural agents care more about locals than distant others are more likely to bend economic game rules in favour of locals. Reminders of traditional values that prioritize local affairs boost local favouritism. Similarly, reminders of existential threat from devastating storms and resource scarcity reduce donations to outsiders, but reminders of Christianity prime beliefs that boost offers to outsiders. These decisions about how to direct one’s cooperative effort toward either distant strangers or local in-groups help iTaukei Fijian communities sustain the social networks they rely upon for daily life.

Starting in 2017, I have begun working with people living in villages on the Western portion of Kadavu, Fiji.

Kadavu Island is the southernmost island in the Fijian archipelago, and the fourth largest of Fiji’s islands. Despite it’s size, Kadavu remains largely remote, with most families relying upon subsistence farming/ fishing. The tourist industry has less impact in Kadavu than Yasawa; the majority of families rely on yaqona cultivation as a primary cash crop. However, the cash economy is largely restricted to purchases from the shops in the largest town of Vunisea; much of the daily exchange among villagers is along kinship lines. 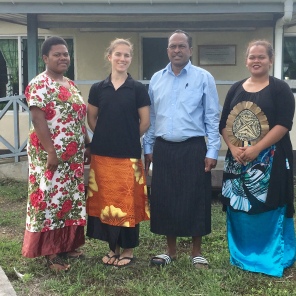 From 2011-2014, I had the immense privilege to work with the people living in the northern-most villages on Yasawa, Fiji.

Yasawa Island is the northernmost island in the chain of volcanic islands called the Yasawa Island Group, located off the north-west coast of Fiji’s main island, Viti Levu. Yasawans maintain a largely traditional Fijian village lifestyle. Most families get the majority of their food from fishing and gardening root crops like cassava in small family plots, with some monetary income gained through interactions with the tourist industry.

In my Yasawan field research, I collaborate with my supervisor Joe Henrich on his ongoing, long-term research project on Cultural Learning, Cognition, and Cooperation. I have also worked alongside Matthew Gervais and Michelle Kline, who work on more explicitly anthropological research in these Yasawan villages. I also collaborate with Aiyana Willard on several projects comparing Yasawans to Fijians of Indian descent (Indo-Fijians) on Viti Levu.

Email: Rita.McNamara[at]vuw.ac.nz
64-04-463-5571
Need to book an appointment to see me? Check out my availability here:
calendly.com/schedule_w_drrita

Looking for something specific?